Avraham Firkowicz in Istanbul (1830-1832): Paving the Way for Turkic Nationalism 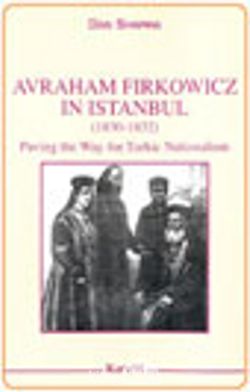 Avraham Firkowicz in Istanbul (1830-1832): Paving the Way for Turkic Nationalism

5,72 TL
% 23  indirimli
Liste Fiyatı: 7,41 TL
SATIŞ YOK (TÜKENMİŞ)
+
-
Haber Ver
Avraham Firkowicz was the outstanding leader of the Karaims, a Turkic speaking Jewish group in Eastern Europe, in the 19th century, whose scientific activities proceeded his political missions. He was the man, who virtually made the Karaites an ethnically self-conscious group, now accounted among Turks of the Kipchak sub-group, and who started the debates on the very (Turkic) origin of the whole East European Jewry.

Early 19th century was the age, when people started to leave the Biblical traditions on the ancient history of humankind, and to look for their origins in scientific means. On the one hand Indo-European linguistic unity was discovered, on the other hand people realized some similarities in the languages of what is termed the Uralo-Altaic region. Jewish studies also followed the same path. Karaim Jews were very distinct especially from two aspects: They were speaking in a dialect of the Northwestern Turkic (Kipchak), and they were Talmudist, in contrary to the thousand-fold crowded Rabbanite Jews of Eastern Europe. These Jews, few in number, used to live in Crimea, Western Ukraine, Poland and Lithuania. This posed an ethnological problem before inquisitive minds of the age, leading one of whom was Avraham Firkowicz himself, as leader of the community, from what is now Western Ukrain.

He started to make scientific expeditions and pilgrimages to Crimea, the Caucasus, Palestine and Egypt. Among those visits, the most important was his stay in Istanbul for two years (1830-1832). During the Istanbul days, when Turkey started to taste a new era called Tanzimat (The Reformation Age), he organized and educated native Karaim Jews, and certainly learned many. Though Karaims in those days did not call themselves as Turks, Turkic connection at least in language was very important. In his return, he accelerated his studies on Karaim origins. He never termed his people as Turks, but very carefully separated them from the Rabbanite Jews, as well. He had political obligations before his people living under very suppression of the Russian Tsardom. He consequently convinced the Tsar that Karaims were not accomplices in the crucifying Jesus Christ. Privileges for Karaims followed this explanation, as a gratitude. Rabbanite Jews, then jealous of them, were still undergoing suppressions of the Russian officials.